About Us » Overview of our Patron Saints Felicitas & Perpetua

From the martyrdom –narratives of the early Church, we learn about the barbarity to which these saints were subjected. Also we see their Christian patience as derived from a diary that was written by St. Perpetua while she was in prison.

The diary reveals that three men and two women had been arrested for the crime of being “Christians”. The two women were Felicitas and Perpetua. One of the men was probably a blood brother of Perpetua and another of the men was the slave, husband of Felicitas. All five of them were “catechumens”, the name given to those preparing for Baptism.

Perpetua belonged to a noble family of Carthage. Her father was a pagan, but her mother may have been a Christian. With her in prison was her baby son. Her companion, Felicitas, also referred to as Felicity, was married to a slave and was expecting her first child when they were arrested. The anti-Christian edict of the Emperor Severus demanded the death penalty for being a Christian.

While in prison, Perpetua experienced several visions. She interpreted these as indicating that she and her companions must suffer and give up the joys of this world in exchange for the only true joy – that of being with God in heaven. Felicitas suffered from a great fear. It was against the law for a woman with child to be exposed for punishment. Felicitas feared that her martyrdom would be delayed because of her condition. Two days before the persecutions she gave birth to a little girl. The next day the children of both mothers were taken from them.

On the infamous day, the martyrs–to-be proceeded with joy into the amphitheater and the ordeal began. The punishment called for the two women being attacked by a wild heifer. Felicitas and Perpetua stood side by side and received repeated maulings from the wild beast. After a brief rest, the crowd demanded more blood. When Felicitas and Perpetua heard this they proceeded to the center of the amphitheater where the gladiators awaited them. The Saints embraced, kissed each other, and received the sword. Our saintly patrons died for Christ with serenity and even joy. 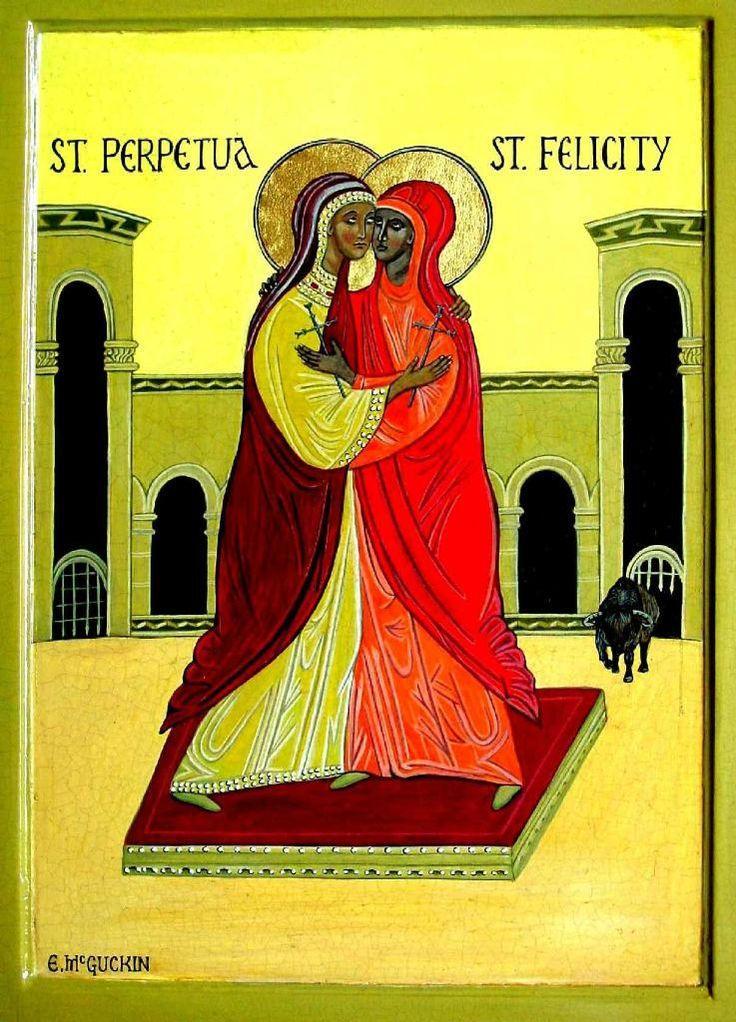